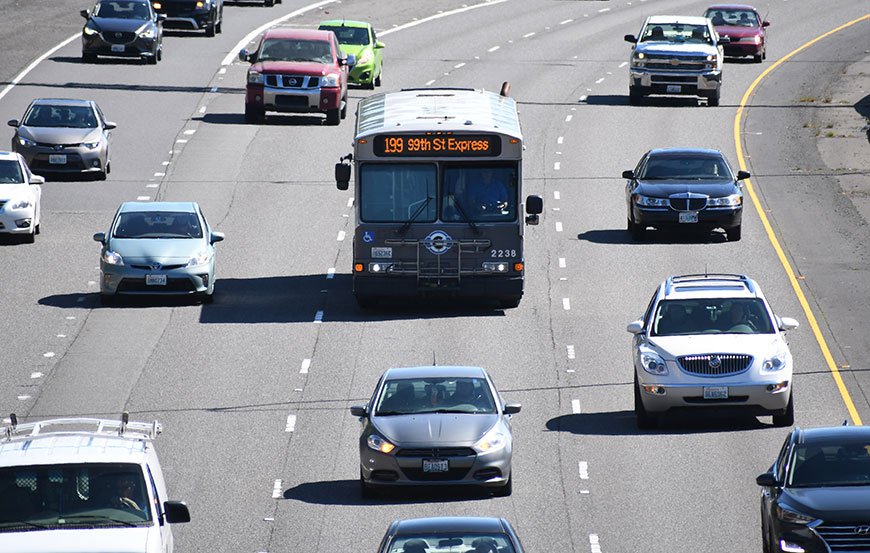 When the region’s Bus on Shoulder pilot project began back in 2017, it allowed C-TRAN buses to bypass rush hour traffic by driving on the shoulder of State Route 14 between 164th Avenue and Interstate 205. The result: immediate travel time savings and happy bus commuters. The practice is still in use two years later, mostly on the Route 164 and Route 65 buses that use that stretch of SR 14.

Now, we’re working with the Washington State Department of Transportation to bring Bus on Shoulder to a second, more impactful corridor in Vancouver: Interstate 5.

This I-5 Bus on Shoulder corridor covers the stretch of I-5 between 99th Street and the Interstate Bridge – an area where traffic routinely stacks up during the morning commute. The new corridor would work similarly to the existing one on SR 14. But there will be key differences. On I-5, buses will use the left shoulder instead of the right. That’s for safety and logistical reasons given the number of on-ramps and off-ramps on the right side. And the I-5 Bus on Shoulder corridor will apply to the southbound side of the freeway only.

Buses will still only use the shoulder during peak travel times when traffic is moving slower than 35 miles per hour. And emergency vehicles will still get priority.

As any regular commuter knows, congestion on that stretch of southbound I-5 through Vancouver is bad and getting worse. The I-5 Bus on Shoulder lane could potentially create huge time savings for transit riders, and much better reliability for the C-TRAN Express routes that drive that corridor in the morning en route to Portland.

WSDOT will have to restripe and rework portions of I-5 to accommodate buses using the shoulder. That’s expected to happen next summer – meaning I-5 Bus on Shoulder will start just in time for the nine-day closure of the northbound span of the Interstate Bridge scheduled for September 2020. (If you’re currently a freeway warrior who drives, that might be a good time to consider hopping on the bus. It could get ugly.)

While this would be just the second Bus on Shoulder corridor in Clark County, the concept has been successfully used in other parts of the country for many years. It’s also been used elsewhere in Washington. We’re hoping to build on that success for our region.

Tuesday, May 04, 2021
Super Taco's express taco (left) and carne asada taco (right) To celebrate Cinco de Mayo, we invite you to join us on a taco tour of Vancouver. When you think of tacos, Vancouver may not be the...