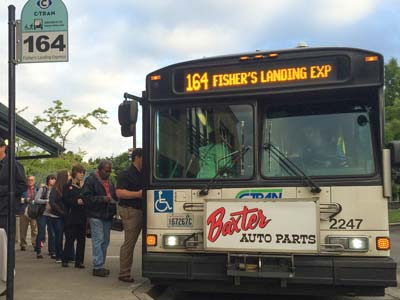 In June, the C-TRAN Board of Directors gave the green light to a project that aims to quicken bus commutes on Vancouver’s east side by changing the way they travel on Highway 14. The program allows buses to use the shoulder, and it’s called—ahem—Bus on Shoulder.

Here’s how it works: During periods of heavy traffic, buses will have the ability to bypass it by driving on the shoulder of Highway 14 between 164th Avenue and Interstate 205. There will be limitations, of course. Buses on the shoulder will only be allowed to travel 15 mph faster than the flow of traffic, and no faster than 35 mph. If the shoulder is blocked for any reason, or an emergency vehicle needs access, buses will merge back into the regular travel lanes.

Later this month, the Washington State Department of Transportation will restripe portions of Highway 14 before training begins. Crews will also add new signs alerting drivers to expect transit vehicles on the outside shoulders in both directions. To be clear, the program applies only to fixed-route transit buses. It does not allow anyone to use the shoulder. (Sorry, car commuters.)

Bus on Shoulder is not a new concept. It has been used successfully for years in other parts of the country to improve transit travel times and make buses less prone to getting bogged down in traffic congestion. And anyone who regularly commutes from east Clark County knows that Highway 14 is a good candidate to try it out in this region. It will apply to any C-TRAN route that uses that stretch of freeway, most notably Routes 65 and 164. Route 164 is one of C-TRAN’s busiest Express routes to downtown Portland, and it’s also one of the lowest in terms of on-time performance. We hope Bus on Shoulder improves that.

Once the new striping and signage are in place, C-TRAN will begin training before we begin the program in earnest later this year. The pilot will last for 18 months, at which point C-TRAN and WSDOT will evaluate whether to continue—or expand—the program. Stay tuned!