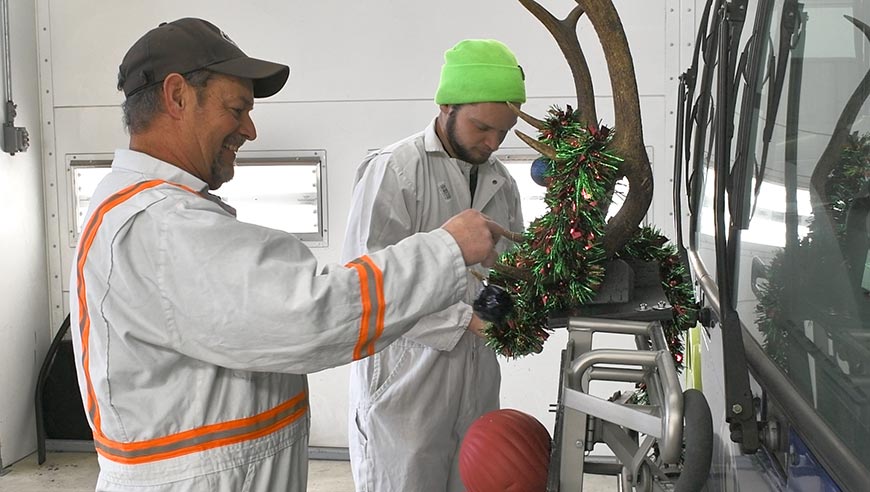 Mikey and Brandon Felts work on a holiday project in the C-TRAN Maintenance shop last December.

Earlier this year, C-TRAN decided to install a new warning system on Vine buses to alert passengers when the wheelchair ramp is in motion. But the Maintenance department didn’t hire an outside company to do it. It didn’t turn to another transit agency for ideas.

It turned to Brandon Felts, a 24-year-old electrical engineering student.

Felts took on the project from start to finish, devising a system that uses the existing control sensors on the vehicle to trigger an audible announcement—Felts’ own voice—to sound whenever the driver activates the wheelchair ramp. Synchronized red and green lights flash to indicate when it’s safe to board. The system runs through microchips that Felts programmed and installed.

“It’s very exciting,” he says. “This is my first project that has actually been used by somebody. And I hope it will help with what we’re trying to accomplish.”

Felts’ design has done more than that. It’s already caught the attention of other transit agencies who are interested in how it works. Currently installed on one Vine bus, the new safety feature will be duplicated—with a few tweaks—on the rest of the Vine fleet in the coming months.

Brandon Felts first joined C-TRAN as a temporary employee in 2019. He’s currently taking classes to pursue a career in electrical engineering. He also happens to be the son of Mikey Felts, a C-TRAN coach technician in the Maintenance department for the past 23 years.

Both say they enjoy working together as father and son. Both say they’ve learned from each other. They’ve already worked on projects together at home, before Brandon arrived at C-TRAN.

“I’ve always gotten help from him with anything I needed,” Brandon says. “We’ve worked on cars at home, or bikes at home.”

Both also share a similar approach to finding solutions to any hands-on task.

“He’s got the same mindset, so it’s not a whole lot of explaining,” Mikey says of his son. “He’ll see it, and he can roll with it.”

Turning to in-house ingenuity is not a new approach for C-TRAN. The C-TRAN Maintenance team has created its own fixes on numerous occasions over the years.

This spring, for example, Mikey helped design and install a series of protective barriers on C-TRAN buses to protect operators and passengers during the COVID-19 pandemic. The task meant creating different barriers for different vehicle types in the C-TRAN fleet. Some could be fastened to existing elements on the bus; others required the creation of an entirely new stanchion to hold the barrier in place. In all, the protective shields were installed on more than 100 fixed-route vehicles in a relatively short time—and a huge cost savings compared to ordering an outside product.

“Those were all our own madness,” Mikey says. “You could say design, but I say madness.”

Mikey and Brandon have collaborated at C-TRAN even before this year. Last December, the two transformed a 40-foot bus into a rolling light display for the Washougal Lighted Christmas Parade. For his part, Mikey says he’s lost track of all the other unique projects he’s worked on over more than two decades at C-TRAN. He wouldn’t have it any other way.

“They always throw stuff at us that I have to think about. It’s not mundane. It’s not just robotic,” Mikey says. “You’ve got to stop, think, see what needs to be done.”

Thursday, July 15, 2021
Ice Cream Renaissance's peanut butter blitz ice cream on a waffle cone Is there anything better than a freezing cold scoop of ice cream on a hot summer day? If you’re lactose intolerant, maybe...