Helping people is Cherish DesRochers’ passion. It shows in her day job as a C-TRAN Customer Service Representative. And it shows in the way she spends her time off the clock.

DesRochers is the founder of Food With Friends, a local nonprofit organization that provides assistance to homeless people in the community. That means street outreach, serving food, distributing donated items or connecting people with other services and organizations.

Sometimes, it means something as simple as a hug.

The mission of Food With Friends is connecting with people on more than just a superficial level, DesRochers says. It’s forming relationships, she says, and meeting people where they are without judgment. DesRochers and other volunteers see many of the same people serving food every Saturday night in downtown Vancouver, for example, and know dozens by name. That human contact and connection can be hard to come by on the street, she says.

More recently, Food With Friends has added another initiative to its list: the Shower Outreach Project. When a well-used public shower closed last year, DesRochers and others began looking for ways to fill an important, yet often overlooked need. Eventually they got connected with a person who had a ready-made shower trailer for sale. Food With Friends started raising money to purchase it.

“We had the funds committed in less than 24 hours,” DesRochers says.

The shower now operates every Friday and Saturday at Friends of the Carpenter, 1600 W. 20th St. in Vancouver, and every Sunday at Living Hope Church, 2711 N.E. Andresen Road. The shower trailer has received a lot of attention and interest since it started in January, and Food With Friends hopes to find a way to offer it to more people.

“We want to get it all over the county,” DesRochers says. “There’s interest in this everywhere.” 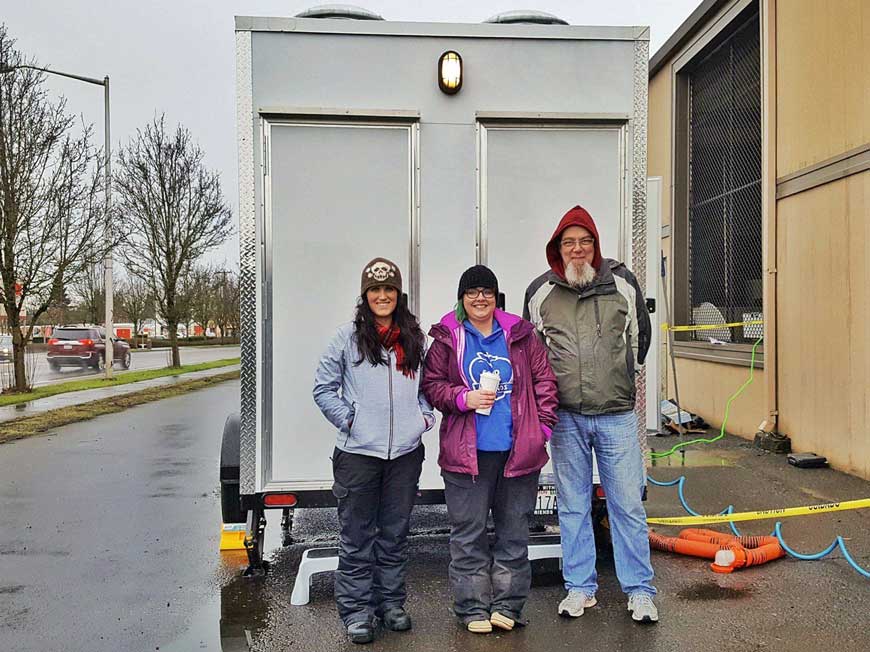 Cherish DesRochers, left, and other volunteers began providing mobile shower facilities for those in need earlier this year.

DesRochers says her nonprofit work has made her more compassionate and improved her ability to connect and communicate with people. That skill is important for any C-TRAN Customer Service Representative, and occasionally the two roles overlap. DesRochers says she’s encountered people in outreach work who either use C-TRAN now, or could benefit from the service. And while it can be a challenge to juggle everything – DesRochers is also a member of the Battle Ground City Council – it’s the connections and relationships with people that keep her going, she says.

“It means a lot to me just to be able to help someone,” DesRochers says.