In late 2017, C-TRAN hired a private firm to help us study possibility of new uses for the land around Fisher's Landing Transit Center. The idea is to meet the needs of the community in a way that enhances transit ridership potential. Think housing, retail, offices or open spaces—or a mix of those.

TOD, as it's known in transit circles, can provide a lot of benefits. Among them, according to the Federal Transit Administration:

So what does that look like for Fisher's Landing Transit Center? That's where you come in. We've been meeting with nearby businesses and other stakeholders in recent weeks, and we just concluded an online survey asking participants to weigh in on a series of development concepts and other questions. On Thursday, February 15, we're hosting the first public open house meeting at the transit center, in the upstairs Rose Besserman Community Room. More meetings will follow. 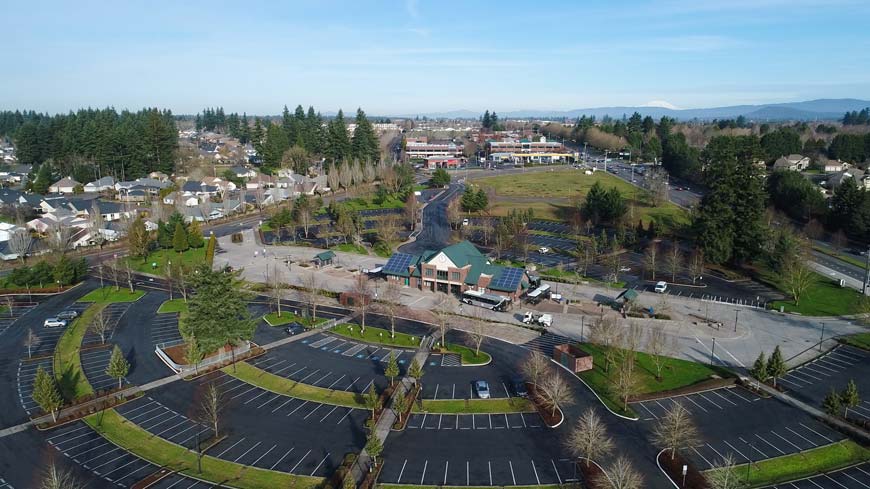 Fisher's Landing Transit Center sits on about 20 acres in east Vancouver, near the convergence of State Route 14 and Southeast 164th Avenue. Some of that land is unused, making it a good candidate for the possibility of new development. The facility is also one of C-TRAN's busiest, with hundreds of people coming and going every day. The park-and-ride lot routinely filled up on weekdays before the south side was expanded in 2016.

One of the best local examples of transit-oriented development is known as Orenco Station, which sits along the MAX Blue Line in Hillsboro, Ore. It's a modern mix of high-density housing, restaurants and shopping with an urban town center. The area has dramatically changed in the past 20 years.

Will another Orenco Station pop up in east Vancouver? No. Part of the feasibility study now underway is to determine what's practical and economically viable for Fisher's Landing. In other words, any development on the property will only move forward if we feel it makes sense for the community, and for our riders. We're committed to serving the needs of our customers no matter what.

The feasibility study is expected to wrap by the end of this year. What's next? Stay tuned.