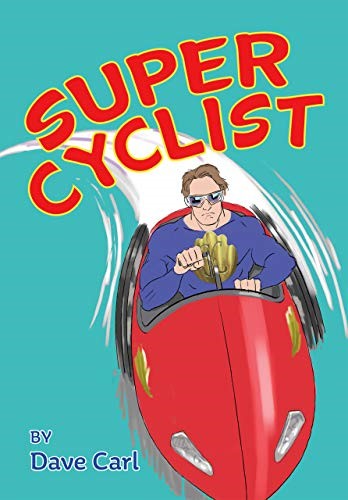 You don’t always have to look far to find everyday superheroes; sometimes, it’s the person sitting next to you on the bus. C-VAN rider Dave Carl is one of them. He may not have x-ray vision or a fancy costume, but he has the passion and drive to do things that others may assume he cannot. Dave has spina bifida and uses a wheelchair. Those who don’t know him may see his chair and underestimate what he is capable of, but you’ll find that they are putting limits on him that don’t exist. Dave’s superpower is that he knows what he can accomplish and is his own best advocate.

Dave is the author of two children's books: Super Cyclist Saves the Day, and Super Cyclist Battles Stinkball Man. The hero of the books, John, uses a wheelchair. In the books, John feels a calling to fight crime, but he is used to people telling him what he isn’t capable of due to his disability—sound familiar? Throughout the books, John casts aside the ideas that others have about him and his abilities and works relentlessly toward his goals. The books show children that even if their path to their goal isn’t the same as everyone else’s, they can still do great things and should believe in themselves. Dave also puts his writing skills to use on his blog, shareindependentliving.blogspot.com. The blog is a spot for him to share personal experiences and resources surrounding independent living. Dave graciously agreed to chat with us about his projects and his very personal connection to them.

Would you mind telling us a bit about your disability and some ways that it impacts your life?

I have spina bifida, and I also have a seizure disorder. As somebody with spina bifida, I use a wheelchair full time. Actually, with the seizures, when I was in high school and college, one thing that affected my ability to concentrate was reading, so I actually had to have everything read to me, which is why this [writing books] was such a big thing for me to do.

Do you remember how old you were when you noticed that people treated you differently because of your disability?

Well, I first remember, probably middle school. That was probably the roughest time with getting bullied, and things like that. Before that it was just who I was, I still did the activities that my siblings did and stuff like that.

How did you get into writing?

First it was something more to do if I wasn’t feeling good. If I had a long hospital stay, it was something to do. It was just general writing. Writing stories, maybe kind of a journal, diary type stuff. Eventually I started writing down more fictional stories. When I started out as a social worker, I decided to make it more into stories to help other people. Because independent living is my focus as a social worker, I thought I may as well help kids on their way toward independence, to start with young kids on their self-confidence.

What similarities do you share with the hero of your books, John?

I would say number one that I’ve always used the wheelchair, but also, a lot of times, the things that he does on a daily basis. I tell people that I can do things. It’s very common for people to come up to me and say I feel bad for you because you can’t do certain things—you can’t play sports, you can’t work, you know, all of these things. That’s something I’ve heard my entire life, including adulthood. That’s one thing the main character has to prove, is that yes he can, he can do things other people can’t do. Part of it is overcoming obstacles and proving to yourself that you can do the things you want to do, which is the big thing that the main character has to do.

Is there any other part of your life that has inspired your books?

A big inspiration is what I see as a social worker, because I see a lot of people, I work with a lot of people who are very big inspirations to me. I see them and it’s like, “Oh, wow, that is pretty cool that they do that.” A lot of times people will say, “Oh, that’s so cool,” and they’re the ones that showed me. Everybody has ups and downs in their lives, and it’s like wow, it just helps me. You may think I’m the one helping you, but you’ve helped me. You have shown me that even if things aren’t great, I can still do it, it takes time. Another thing would be from my family. My family has been huge when it comes to teaching me that it’s so important to see myself and my abilities before the wheelchair. Those are my earliest memories, my parents fighting for me, and they taught me to fight for myself, and to become my own best advocate. All of my writing has to do with self-confidence, with believing in yourself, with understanding just because somebody says you can’t do something doesn’t mean it’s true.

You have a blog where you focus on independent living. How has C-VAN helped you live independently?

C-VAN helps me a great deal because number one it enables me to get to work. Instead of everyone having to drive me to appointments, to the store, I have the independence because of C-VAN to do these things on my own. It teaches me not only do I have the ability, but it teaches me how to do it, it teaches me how to make decisions, how to ride transportation, how to access transportation. Without C-VAN I would not have any of these skills, I would not have any of these opportunities to access all of these things independently. That’s what I teach is when it comes to independent living, it’s not just living on your own. It’s decision making, it’s self-confidence, it’s accessing resources. All of those are different aspects of a person’s independence. That’s why C-VAN is so important when it comes to my own personal independence.

Do you have other local resources you would like to point people toward who are interested in independent living?

I’m actually the Board President of PEACE which is Parents Empowered and Communities Enhanced. It helps families of people with development disabilities and individuals with developmental disabilities themselves to access resources and to overcome obstacles and things like that. One of the things I do on the board is co-teach a Building Independence class which is every Thursday night over Zoom.

What is the main thing that you hope children take away from your writing?

The main thing that I hope is that people understand that just because someone says that you can’t do something doesn’t mean it’s true, and that you need to follow your dreams. Those are two very big messages that I’m always trying to give to kids. Actually on the back of my book that’s a quote, and it's a very big message in the book.

Is there anything else you’d like people to know?

I just love to let people know that it’s important for people to see themselves before they see their disability. It’s important to see your abilities before you see whatever problems are going on in your life.

A Gift From C-TRAN To You: Transit Royale

Friday, November 19, 2021
You don’t always have to look far to find everyday superheroes; sometimes, it’s the person sitting next to you on the bus. C-VAN rider Dave Carl is one of them. He may not have x-ray vision or a...
Read More...