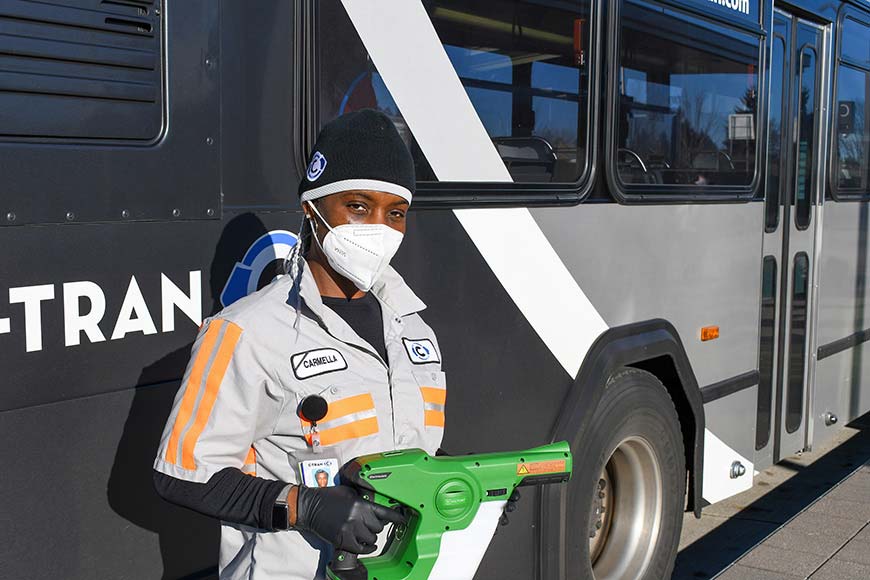 When the COVID-19 pandemic and stay-home orders took hold last spring, one result was a dramatic drop in transit ridership across the country.

C-TRAN experienced its own decline, though we fared better than many of our counterparts. Still, our ridership numbers, particularly on C-TRAN’s paratransit service, C-VAN, remain far below pre-pandemic levels.

As we continue to adjust to a new reality, two dozen C-VAN operators have shifted gears to fill other needs while remaining a part of the C-TRAN team. That includes 13 former drivers who are now cleaning and disinfecting buses at transit centers full time.

“We started on a temporary basis,” says Paratransit Dispatch Supervisor Jill Carrillo. “When we first started it, we thought, oh, it will be a month.”

COVID, of course, had other plans.

As the months went on, the employees remained in those new roles. Now, new agreements between C-TRAN and the two unions that represent many of our drivers and maintenance workers ensures those jobs will be permanent. The partnerships with the Amalgamated Transit Union Local 757 and the International Association of Machinists and Aerospace Workers Local 1432 were finalized earlier this fall.

They’re partnerships that protect jobs for C-TRAN employees—and protect the health of C-TRAN riders and drivers still out on the system. The addition of 13 transit field service workers means people are now out at all major transit centers cleaning buses seven days a week. Another 11 C-VAN operators moved to fixed-route to help keep us running full-strength and keep passengers spread out.

In all, the number of people who moved to new positions represented about a third of C-TRAN’s paratransit operator workforce.

One of the people who made the move was Carmella James. She joined C-TRAN as a C-VAN operator in 2018. Now she’s cleaning buses full time, primarily at the Vancouver Mall Transit Center.

“I was just thankful that we were still able to have a job,” James says. “For me, I’m just trying to look at the bright side of things.”

Though the initial uncertainty was stressful, James says she’s come to enjoy the job she’s doing now. She and others have developed a methodical, efficient approach to touch as many vehicles as possible as they come and go at the transit center.

In addition to the union representatives who worked on the agreements, the process included other C-TRAN leaders and employees behind the scenes to make it happen. Carrillo says she’s grateful everyone was able to stay within the C-TRAN family. And those workers will have the option to go back to driving for C-VAN once ridership returns, Carrillo says.

Thursday, July 15, 2021
Ice Cream Renaissance's peanut butter blitz ice cream on a waffle cone Is there anything better than a freezing cold scoop of ice cream on a hot summer day? If you’re lactose intolerant, maybe...