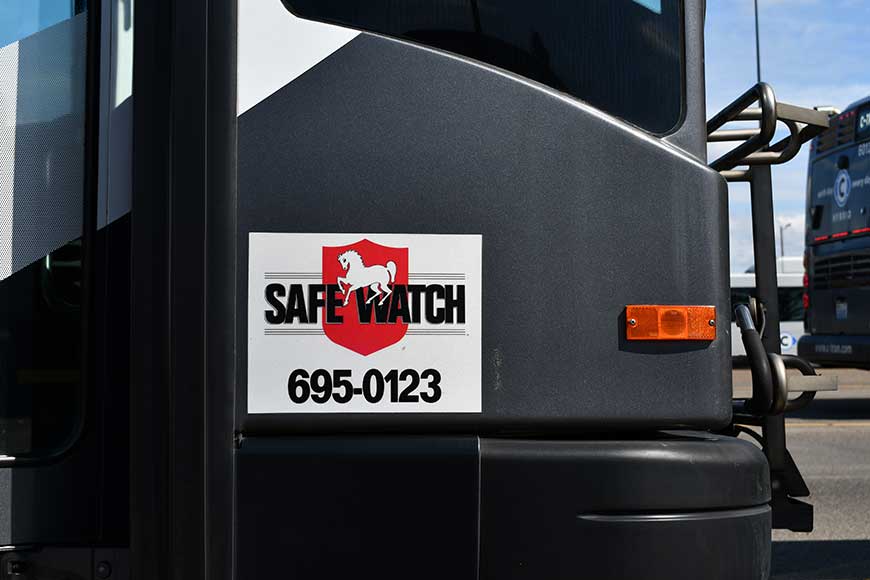 If you haven’t heard about C-TRAN's SafeWatch initiative, it’s about time that you did.  SafeWatch has been a part of C-TRAN since 1998, when we teamed up with Clark Public Utilities crews to offer a more visible link to help when the public is in need of it. Today it’s a partnership of numerous emergency response agencies and others designed to make our community safer.

Every C-TRAN bus, van and vehicle is also a SafeWatch vehicle with instant access to emergency help. For the public, this implies that each bus is a place of safety. All you need to do is flag down a C-TRAN vehicle for help, and the driver will do his or her best to ensure your safety.

As part of a national initiative that promotes security on transit, C-TRAN has participated in the See Something/Say Something campaign in cooperation with the city of Vancouver, the Vancouver Police Department, local neighborhood leaders and others.

According to C-TRAN Deputy Director of Operations Bob Medcraft, who has been at C-TRAN for 26 years, “Safewatch has been an integral part in the safety of C-TRAN for years.”

Medcraft can pull up countless SafeWatch success stories in the C-TRAN files, including suspicious activities that were reported, and bus drivers doing their jobs to assist and help lead to a larger benefit for the citizens.

Since SafeWatch has been in effect, C-TRAN employees have reported accidents and burglaries, provided information on runaways and helped with lost children. With C-TRAN’s involvement in SafeWatch, there is reassurance and clarity for the safety of our community, and trust in the system and its future.

One such example occurred in 2017, when C-TRAN coach operator John Shreves was along one of his usual routes early on an August morning when he came upon a child with special needs who was walking toward Fourth Plain Boulevard by himself. This young man was 13-year-old Vancouver native Colby, who lives with Down syndrome, autism and other medical conditions.

Shreves realized Colby was in trouble, and took the initiative to help him. He proceeded to call C-TRAN dispatch and explain the situation. As Colby’s family had already called the police, it was perfect timing. Shreves stayed put and kept Colby on the bus until police arrived. He was soon reunited with his family.

This is just one of the many examples of selfless acts displayed by C-TRAN drivers and employees. With SafeWatch, at C-TRAN we want to ensure the safety of our public. Whether they ride the bus or not, drivers will always be prepared to make the right decision for the public's safety, just as Shreves did with Colby.

Tales from the Lost and Found

Friday, June 12, 2020
It’s common to see things like keys, phones and coats in any lost and found. A prosthetic leg? Not as common. But it’s one of the many oddities that have passed through C-TRAN’s Lost and Found...