The C-TRAN team welcomed its newest member this week. Forgive him if he’s a bit sleepy; he’s only about 10 weeks old.

His name is Jamboree, and he’s training to become a service dog. The black lab will spend the next year with C-TRAN’s Lead Travel Trainer, Veronica Marti. That means he’ll be in the C-TRAN office most days, and out and about on the bus system with the clients that Marti helps learn the ropes of using public transportation.

“Wherever I go, he goes,” Marti says.

Marti is training Jamboree in partnership with Guide Dogs for the Blind, a nonprofit organization that pairs individuals with service animals across the United States and Canada. The organization includes a large network of instructors, training facilities and volunteers that supports blind and low-vision people with its guide dog program. It has a strong presence in the Northwest.

As a puppy raiser, Marti will teach Jamboree basic commands: sit, stay, lay, stand, come, etc. She’ll teach him proper positioning in various scenarios. She use verbal cues and hand signals and other tools that guide dogs commonly use. After about a year, Jamboree will return to Guide Dogs for the Blind to complete his training, graduate and be paired with his long-term human partner as a full-fledged service animal.

An important part of Jamboree’s training is to expose him to as many different environments as possible, Marti says, which will help him stay on task when he’s on the job. Training at C-TRAN, and being around buses, will give him another leg up, Marti says.

“He will be as comfortable with a bus as you can possibly be.”

Also helping is Sindy Quitugua, C-TRAN’s Vanpool Coordinator and Marti’s backup for puppy training. Both Quitugua and Marti went through their own preparation with Guide Dogs for the Blind before Jamboree arrived.

Understandably, many other C-TRAN employees are positively smitten by the daily reality of having an adorable puppy around the office. But there are ground rules: When Jamboree’s vest is on, he’s working. That means no petting, playing or otherwise engaging in puppy love. When the vest is off, however, it’s free time.

Marti says she’s thought for years about training a guide dog. She eventually got connected with Guide Dogs for the Blind through her role as a C-TRAN travel trainer, where she often works with blind clients or other riders with service animals. And Marti says she’s grateful to the rest of her C-TRAN colleagues and leadership for being so supportive.

“He’s been very popular,” Marti says. “He has a following already.” 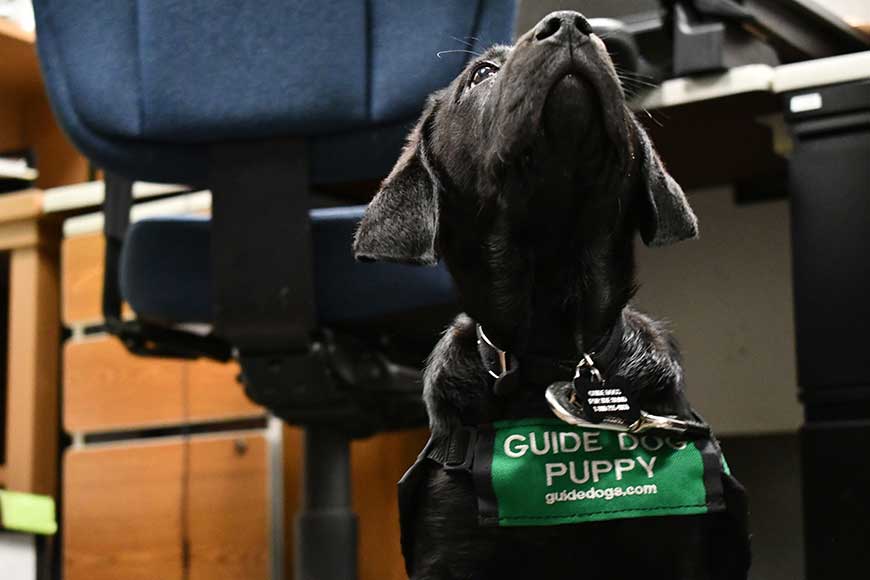