When it comes time for C-TRAN coach operators to pick the routes they’ll be driving, Randy Smith has more options than most.

That’s because Smith has driven for C-TRAN for 23 years, longer than all but 24 of our 168 full-time fixed-route operators. In a seniority-based bid system, that means he can choose his route early in the process. Smith’s current choice: Route 80.

Smith says he prefers a longer, busier shift. Many of his colleagues feel the same way: Among the 20 most senior C-TRAN drivers, the most popular routes in the last bid were Route 37 (five bids), Route 25 (four) and The Vine (four). All three of those routes are relatively long, and The Vine and the 37 are the two highest ridership routes in the entire C-TRAN system. 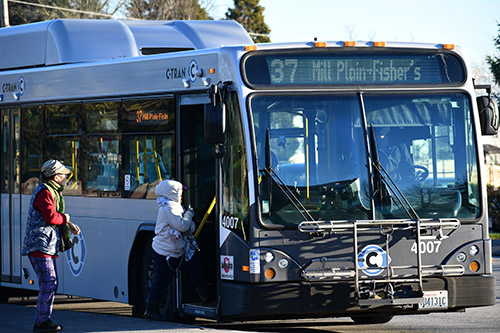 Route 37 is among the most popular routes for C-TRAN's most senior drivers.

C-TRAN drivers bid for routes three times per year, before new schedules take effect in January, May and September. A lot of factors determine what goes first – not just the route itself. Drivers also look at the schedule (earlier shifts tend to get snapped up sooner), the hours (more hours on a given shift mean more pay) or simply personal preference.

The bid is coordinated with the Amalgamated Transit Union Local 757, which represents C-TRAN’s operators. There are three main types of shifts built into the driver schedule. An “A-run” is a continuous, uninterrupted piece of work. A “B-run” is a longer shift with a break of 30 minutes or more in the middle. A “C-run” is essentially a split shift, with a break of up to several hours in the middle of the day.

Express routes to Portland, which generally serve only the morning and evening commute, tend to be scheduled as C-runs or shorter mini-runs. They also tend to go to newer drivers with less seniority. That’s also true of Route 60, a very short – but very busy – route that hops back and forth over the Interstate Bridge between downtown Vancouver and North Portland.

“I don’t like doing the freeway anymore,” Smith says. “I did my time.” 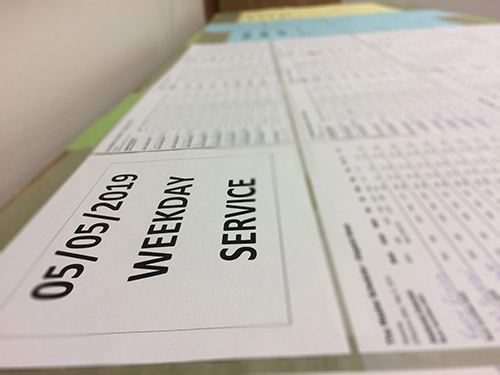 The driver bid sheets laid out for the May 2019 schedule.

Kevin Hogan, an 11-year C-TRAN driver, takes a different option than most. He chooses “extra board,” which means he’s filling in for vacations or sick days on different routes every day.

Hogan is in the top half of the seniority list, but even after 11 years, there are still about 70 drivers ahead of him. The most senior driver? He’s been with C-TRAN for its entire existence, since 1981.

Many riders get to know the drivers that stay on the same route for a while. But if you step on the bus one day and see a new face behind the wheel, it’s nothing personal. It probably means the driver bid just happened.

Tuesday, November 19, 2019
When the region’s Bus on Shoulder pilot project began back in 2017 , it allowed C-TRAN buses to bypass rush hour traffic by driving on the shoulder of State Route 14 between 164th Avenue and...

A Day In The Life Of A C-TRAN Driver