Mill Plain BRT: The Vine is Ready to Grow 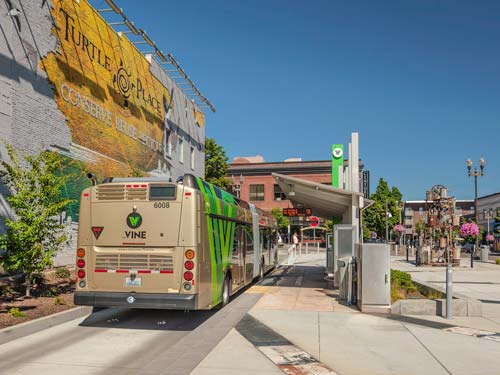 In 2017, the region’s first bus rapid transit system, The Vine, started rolling on Fourth Plain Boulevard. The system has been a success by almost any measure. Within the first year of operation, The Vine delivered a 45 percent increase in ridership, an 89 percent reduction in late departures and a 12 percent reduction in scheduled travel time. We’ve also seen a significant uptick in new housing and other developments along the corridor, many citing The Vine as a key factor in their decision to build.

Now, we’re laying the groundwork for our next BRT corridor: Mill Plain Boulevard.

Earlier this year, C-TRAN hired engineering firm HDR to help launch the multi-year process that will make the Mill Plain BRT project a reality. Many details – including the length of the corridor, station locations and other features—remain undecided. That’s where you come in: In the coming months, we’ll gather public input from residents, businesses and other stakeholders along the corridor. Your input will help shape many of those details, just as it did with The Vine on Fourth Plain. Also helping along the way will be a Corridor Advisory Committee, made up of community members, and a Technical Advisory Committee that includes other public agencies that will play a role in the project.

The Mill Plain BRT system will likely extend west into downtown Vancouver. One key question: How far east should it go? To 164th Avenue and Fisher’s Landing Transit Center? Or all the way to 192nd Avenue?

C-TRAN plans to adopt a Locally Preferred Alternative in the coming year. That’s Phase One. After that, we’ll bring the system into sharper focus during project development in Phase Two. Then comes construction in Phase Three. Keep in mind this is a years-long process, and construction could start in 2020 or 2021.

How much will it cost? That’s to be determined, as many key details remain undecided for now. We’re committed to working closely with the Federal Transit Administration to ensure that the Mill Plain BRT project is eligible for major grant funding to help cover much of the cost. We are also seeking additional funding sources or will use available C-TRAN reserves. C-TRAN has received a $3 million Federal Congestion Mitigation and Air Quality (CMAQ) grant through Southwest Washington Regional Transportation Council (RTC) for construction of the Mill Plain BRT project. C-TRAN operates debt-free, and that won’t change with this project.

We’ll be starting public outreach in earnest in the coming weeks and months. That will include open house meetings and other opportunities to weigh in on the future of public transit in Clark County. You can also find more information about the Mill Plain BRT project at www.catchthevine.com.

Friday, June 10, 2022
For many of us living in Clark County, the thought of fleeing our home for an unfamiliar country is something we can’t fathom. Sadly, it’s a global reality, with the UN Refugee Agency estimating...
Read More...

Tuesday, March 29, 2022
Spring has arrived in Clark County, and with it spring blossoms, warmer weather and longer days. The cold and gloom that preceded it make it easier to appreciate the change in seasons, but that...
Read More...

A Gift From C-TRAN To You: Transit Royale