When C-TRAN first introduced its current logo and color scheme in 2007, it didn’t fully retire the original logo that has adorned our buses for more than three decades. Mark Tolleshaug still keeps an eye out for it when he’s in Vancouver.

“If I drive around long enough, I always find it,” he says.

It was Tolleshaug and his twin brother Rick who designed the logo as part of a contest in 1981. They lived in Longview, and both attended Washington State University when they learned about the contest from their older brother residing in Vancouver. Mark was studying graphic design at the time, and as luck would have it, his class had an upcoming project on fleet graphics. The instructor, delighted that a student found a real-life project to apply as course work, thought the C-TRAN contest was a great opportunity and encouraged him to go for it.

“I knew I needed to do quite a bit of work to compete,” Mark says, going up against design agencies and other professionals. “I was just a student at the time.”

Mark recruited his brother Rick to help and they got to work. They sketched out several rough ideas and refined the concepts they felt had the most potential. At one point, they toured C-TRAN’s facilities in Vancouver to get a better sense of the operation and its background.

Eventually, the Tolleshaug brothers submitted three entries. The winner—a now-familiar two-toned design with the C-TRAN name accented by a wheel-shaped “C”—was chosen from more than 300 entries. Mark vividly remembers receiving the phone call with the news at the WSU fraternity house where he lived.

“I couldn’t believe it. Imagine how exciting it is for a student to win something like that. It helped solidify my decision to become a professional designer,” Mark says.

Mark and Rick split the $1,500 prize from the contest. The real prize, Mark says, is how the C-TRAN logo gave him an important piece of real work as he started his career. Today, Mark is the owner of a graphic design studio in Kirkland. Rick is the principal at an architecture firm, also based in Kirkland.

It’s been 10 years since C-TRAN began using its current logo. We’ll eventually retire the original logo for good. But after rolling for 36 years and counting, the Tolleshaugs’ design will remain a part of C-TRAN and Clark County history.

“It will always be something I am real proud of,” Mark says. 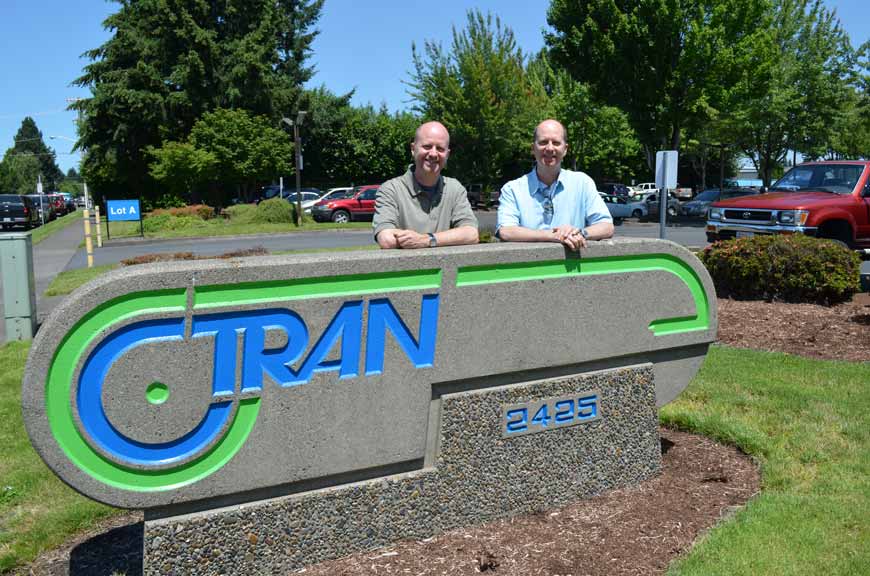 Rick (left) and Mark Tolleshaug at C-TRAN headquarters in 2012.