Behind the Scenes: Orchestrating the Afternoon Commute

It’s just after 3 p.m., and the first wave of Express buses has left C-TRAN headquarters, headed toward downtown Portland. It’s raining outside. Bonnie Woodring looks up at a large screen displaying traffic conditions on Portland-area freeways.

There’s a lot of red.

She glances back at one of three smaller monitors in front of her, showing the location of each vehicle as it trudges southbound.

“They didn’t do too bad, actually,” says Woodring, one of C-TRAN’s fixed-route relief supervisors. “They’re going to come through a little bit late.” 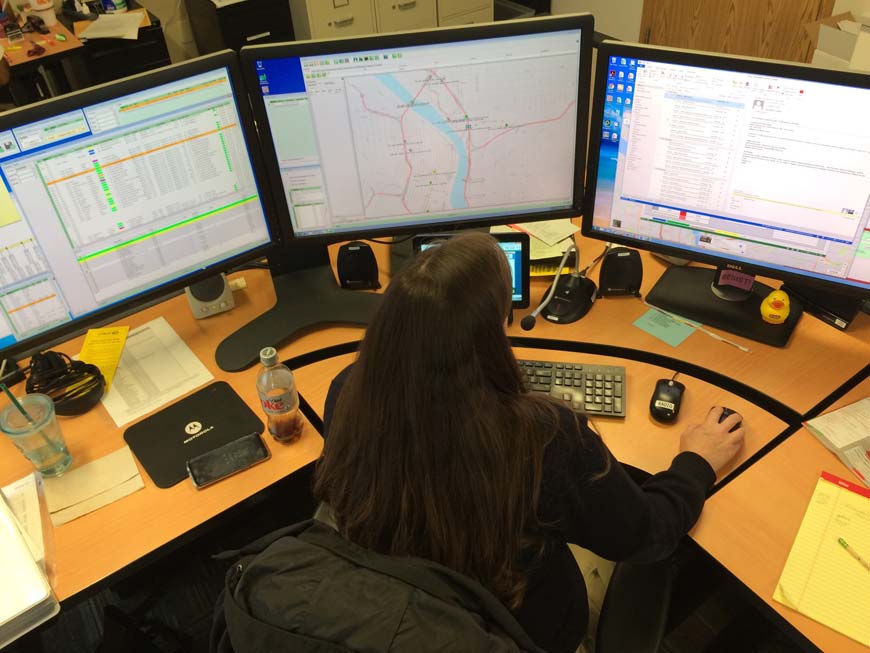 This is the view from C-TRAN dispatch, where dispatchers choreograph a daily dance with the dozens of Express buses that travel in and out of Portland in often unpredictable conditions. The morning and afternoon commutes are different animals, and it’s the afternoon commute that often requires the more hands-on approach. Dispatchers stay in constant communication with drivers. They watch traffic conditions and hazards in real time. And they make adjustments on the fly to ensure that trips stay as close to the schedule as possible.

Sometimes, drivers are reassigned from one route to another based on their location and the next scheduled time point. That’s called a block swap. For example: Driver 1 might be assigned to Route 105, and Driver 2 is on Route 164. Say Driver 1 gets back to downtown Portland on a second trip at 4:15, when the 164 is scheduled to depart. Driver 2 is nowhere in sight. In that case, Driver 1 is probably going to take that trip, swapping to the 164. Driver 2 will end up on a different route when he or she arrives to the Portland transit mall.

“You see people come in. It’s like a conveyor belt,” says Dispatch Supervisor Randy Scudder. “You assign people as they come in.”

On a recent afternoon, Scudder coordinates the commute with Woodring and fellow Dispatch Supervisor Richard Santa Ana. The three work trip by trip to make sure each time point is covered, using color-coded spreadsheets to track where each driver is assigned. C-TRAN can also stage additional buses in Portland as “trippers,” waiting to be inserted into the queue as needed. Using trippers is a common practice on days when extra drivers are available. This wasn’t one of those days.

Often, drivers are the dispatchers’ eyes on the road. At 4:09, a voice comes over the radio to report a crash on southbound Interstate 5, at the Interstate 405 split. Eight minutes later, a different driver reports another crash, this on one I-5 south just after the split.

Scudder replies: “Copy that. Add it to the list.” Woodring sends out notifications to each driver that will appear on the display screen next to the steering wheel. 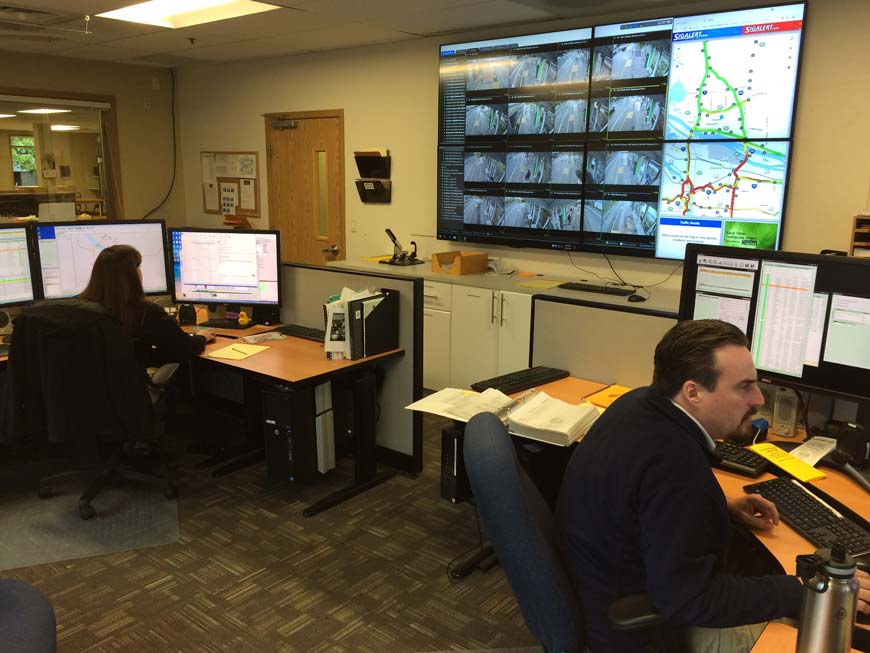 By this time, it’s clear a decision has to be made. The driver assigned to Route 199 isn’t going to make the 4:15 time point. As traffic stacks up, there aren’t any other buses in the vicinity to pick it up. So Scudder reassigns the next Route 134 bus to run as a combo, picking up both 134 and 199 passengers at 4:20. That won’t be popular with passengers—and Scudder knows it—but he doesn’t have a choice.

By 4:30, there have already been 10 block swaps. There’s been one combo, but otherwise no missed trips. On really bad days, there might be as many as 40 block swaps in a single commute, Woodring says. But there are times when the freeways simply don’t cooperate.

Woodring brings a unique perspective to the commute. She used to ride Route 164 regularly, and now sees it from the other side of the radio in dispatch. Before seeing it behind the scenes, Woodring says she had no idea how complex the commute actually is to execute. She suspects the same of many current riders. The daily schedule is static, but the act of making it happen is anything but.

The conversation between dispatch and drivers goes both ways. As drivers report conditions and hazards on the ground, dispatchers can relay that information to the rest of the fleet. That can help drivers adapt and avoid extra slow spots if possible. One common decision point is whether to use I-5 (“front door”) or I-405 (“back door”) to get to downtown Portland.

By about 7:00, the final wave of Express buses will be on its way back to Vancouver. Passengers and drivers will make their way home. Dispatchers will wind down the commute, taking careful note of the day’s activities.

Tomorrow, they’ll do it again.