C-TRAN Maintenance: Behind the Scenes 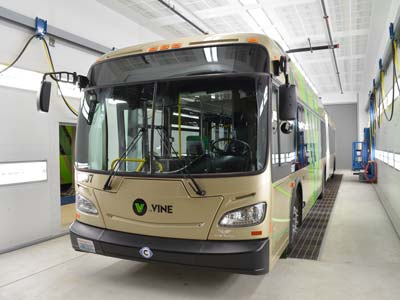 As part of The Vine project, C-TRAN expanded its maintenance facility in 2016. The expansion was long overdue. The original facility was built in the early 1980s to accommodate about 55 buses, and our fleet is more than double that size now.

The expansion was built with The Vine out of necessity – our original maintenance building doesn’t have a bay big enough to serve the system’s 60-foot vehicles. The new addition solves that problem, and it includes a host of other features that benefit our entire fleet, not just The Vine. Among them: A new paint booth, a frame-straightener and a tire carousel unlike just about anything else in this area.

Our maintenance team works around the clock, and they’ve already made good use of the new digs (in addition to the old building, which remains in use). Take a look behind the scenes:


Behind the scenes at C-TRAN's maintenance facility.