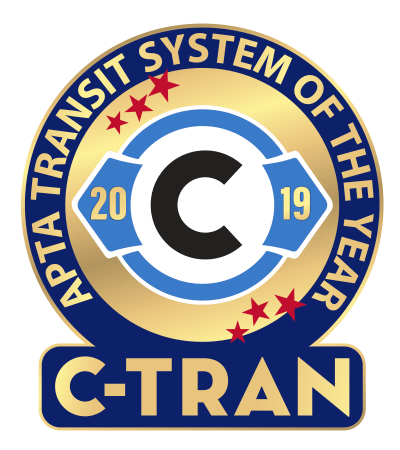 Vancouver, WA: C-TRAN has been named the 2019 national mid-sized Transit System of the Year by the American Public Transportation Association.

The honor was officially announced this month as part of the annual APTA Awards, which recognizes transit systems across North America. As winner of the Outstanding Public Transportation System Achievement Award for mid-sized agencies, C-TRAN was judged among other systems with a total ridership between 4 million and 20 million trips per year. C-TRAN tallied about 6.2 million total trips in 2018.

“This incredible honor exemplifies the hard work being accomplished by our world-class employees,” said C-TRAN CEO Shawn M. Donaghy. “It is also a constant reminder that public transportation is much larger than a bus stop – it’s about community engagement, relationships with local business, providing access to education, workforce opportunities, and having elected officials who work diligently to make Clark County, Washington, a premier place to live. We’re humbled to receive such a prestigious honor from APTA, and we take pride in serving our community each and every day.”

C-TRAN marked several important achievements that were factored in the award selection. C-TRAN:

“Congratulations to C-TRAN for winning the 2019 Outstanding Public Transportation System Achievement Award. Winning this prestigious award means that C-TRAN has been recognized as the top mid-size transit system in North America,” said APTA President and CEO Paul P. Skoutelas. “Not only has C-TRAN created a world-class public transit system, but it has also created a culture and vision of leadership and excellence that is a model for the public transportation industry.”

The APTA Awards highlight the best of public transportation in North America each year. C-TRAN and the rest of this year’s award winners will be honored at the APTA Annual Meeting in October. 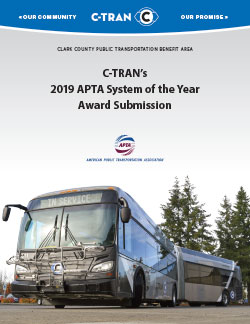 APTA Agency of the Year Submission